Well let me introduce you to “Oink”! So many serious / sad things going on I’m going to tell a few funny tales! There was a guy in Gardiner named Jesse James, and he owned the Pit Stop cafe. He went to a pig sale and bought a pig not knowing it was 10 times the money. He bought ten thinking he had one. Well he sold two to my brother Clarence. They were just wieners and I’m pretty certain Oink ate his little brother cause he just disappeared. Time went on and he got to butchering size and we never butchered him. He had the run of the place and was the most roped, cussed, chased, I’ll kill you, you sonofa …. ,, hog in history! He got clever and if we were packing horse pellets to go to camp he’d make like he was just walking by and grab a bag and scatter them all over! Knowing he’d get at least some to eat. He would winter in an old shed at the bottom of our road. One early morning two guys I knew were riding up northfork to hunt, when out of that shed old Oink came a gruntin and squealing. Both of them got bucked off and then the bounty was put out on ol Oink. He layed low all winter and the really got into trouble when he discovered two gardens in Jardine. One old guy put two .22 bullets into him! To no avail by this time he was 550 pounds and absorbed those bullets like water . He got shy and become pretty nocturnal. One day a neighbor was carrying groceries to her house and sat them down to open door. Oink came up behind her and grabbed that brown paper bag and scattered food for a mile. She shot him with a shotgun and he lived through that. We were still honing our roping and now riding skills on Oink. We’d tie his mouth shut so he couldn’t bite us. One day my older brother Mike killed a moose and Oink ate half of it over night. That was the end of an era and ol Oink! The laughter he brought to country kids looking for entertainment is funny now but I’m sure to the neighbors it was hell. Hope you enjoyed this. 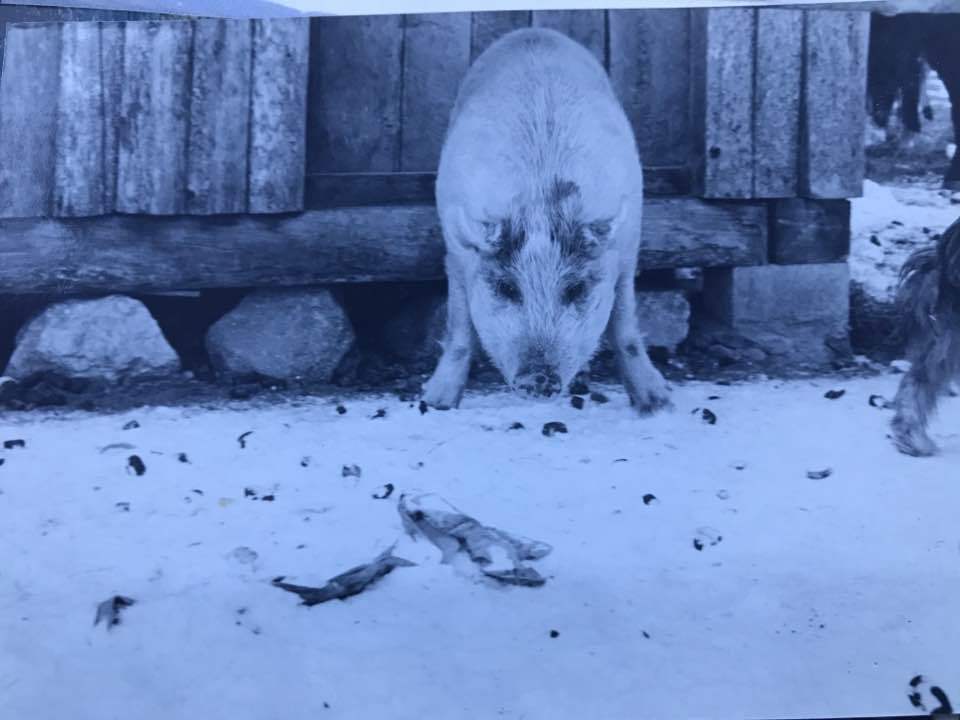