I came in to have a cup of tea to calm my blood pressure! Hugh Glass is headed to his new home.

I was reading the new BLS catalog on the outfitter sale, brand inspections, etc., and the catalog brought back a flood of memories. In 2000 and 2001 I started this Outfitter sale at BLS! The first one I think we took a 100 head of mules and horses. The second one we had close to 400 head. I gave a brand new halter and rope with every animal like they used to do in the old days.

On January 1st of 2001 we fixed up 3 bobsleds for driving teams. The details are too many to write here but we rode drove packed a 100 colts a day for 30 to 45 days. It was an experience I’ll never forget. We picked these 350 colts out of about 600 head. I see in the sale catalog today, the sale was yesterday, mules coming from MN etc., been packed driven in the mountains. Made me ponder a bit. But I’m sure there are mountains in the Midwest!

We rode packed drove colts from Jan 1 to May 25 without a day off. God some mornings were cold and you woke up dreading the bad ones that needed miles. No heat in my barn then. The snaffle bits were hung by the fireplace or down in the furnace room so they wouldn’t freeze to the tongue of the colts and burn their tongue. The saddles when the colts humped up, you could put a basketball under them. No indoor or outdoor arena. Once maybe twice in round corral and it was out in the real big arena. It took a spectacular buck off to even get a look, or let alone “are you ok?” 🙂

John Roach got on this big bay colt, not yet named, he never properly untracked him and I said “Jeremiah watch!” He bucked him off so hard onto the barn wall. John kind of hung there like a cartoon. He then kind of slid down gripping with his fingertips. Marlin named the colt, “Wall Hanger“! Tom Munro from the Silvertip ranch bought him.

I drove so many teams, three abreast that I had to have carpal tunnel surgery after that. I still see some of those teams at the Silvertip ranch. Sometimes I get nostalgic to do it again but I don’t think I could find the help, it took a certain type that wanted to make history. Those horses went all over the world, one going to Charles Bronson’s wife. One won a world championship in jumping. Many went to bucking horse strings! Many just good dude horses or family horses.

I’ve written similiar things about this as it was one of the best things in my life. To gather them and pull up to let your saddle horse blow and watch 800 head of your horses run in front of you, I don’t care who you are it’s quite an experience. I think back to a school teacher who said I may not have as good of a chance succeeding in life as other more well off kids. Anything I’ve ever really wanted to do I did. Still doing. I am starting Colts and can work Peyton my hired cowboy into the ground 😁 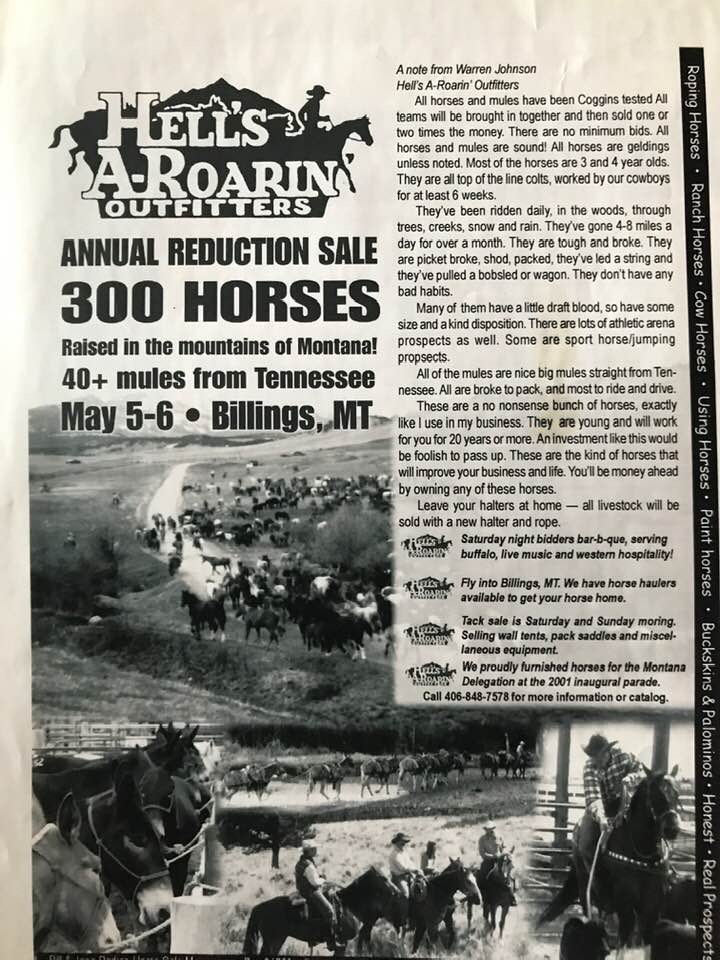