It was a nice winter day when Dave and I embarked on our journey to TN to buy a trailer load of mules . I was the first person in MT to buy mules from Reese Brothers mule co. in Gallatin TN. That was 1984 . I have since bought 2550 mules from Rufus Reese. Here is the story of a non descript red mule named Eeyore . We made it to TN, with being lost a few times a day, a regular occurance . We got to visit the hill folks , sipped a little moonshine and raised a little hell at a biker bar. They ended up liking two country cowboys who never backed down from 28 to 2 odds. Well I got ten mules and a set of harness. Which in about 500 miles I wish I had not bought for 500 dollars. I was on a strict budget . But I hated that word and refused to have it spoken in my presence ! We got going across the midwest and I realized that in about 200 miles I was going to be flat broke. There was a girl broke down on the road in the middle of the night in some Godforsaken stretch of the highway . Dave was pulling his stint at the helm, so he decides to stop back up the highway and give her assistance. This was nerve racking and in the process blew a trailer tire out . So now were down to one spare. We give this gorgeous young lady a ride into her dorm in the middle of a busy college town with narrow streets. She was shocked but happy and gave us terrible directions back to the interstate . This took almost a full tank of gas and one tire . I said Dave Im going to need to borrow some money Im broke . He gives me the ol’ Dave cackle and says nope. I plead my case and he says Ill take the bus home .Well his angle was to buy this red mule! He offered me 300 I said I paid 600 for him .I was now driving and after much haggling he went to sleep . I looked at him and it crossed my mind to stop and buy some sominex and some rope and tape. Then put the sominex in his drink ,tie him up , tape his mouth shut and stuff him in the overshoot of the horse trailer. Oh I was mad! Then I looked at his jaw and thought about putting my fist there and knocking him out and taking the money .. I knew it would be tricky with the angle I had but growing up in Gardiner Mt in the 70s on a Friday or Saturday night fists fight were the norm and I had many scraps! As I was thinking all this I got to laughing to myself and Dave woke up . I told him my plan and we both got to laughing so hard that we damn near wrecked . Anyway he bought Eeyore ! We got home and he got a job driving a sleigh around Mammoth. So he would ride Eeyore to work across Deckard flats from our place . He would buck him off daily.But Dave worked for me for 22 years and believe me there were none tougher. Everything we did was rough and we would compete to see who killed the most elk who danced with more girls etc… So that mule was rank to get him on the ground. He one time ,the following year bucked him off on a rock on Bull mountain and Dave broke 3 ribs. Never took a day off. Well one day Dave drove in the yard in 1989 and said that he traded Eeyore to a guy in CA for a mule that I owned and broke in 1979. Named Jerry. Gentle mule but was a quitter on steep hills. But at least Eeyore was now gone . Well about ten years later Dave picks up a hitchhiker right outside of Gardiner ! He was driving along and the guy looked over at David Gambles string of mules and said I knew a guy in CA that had a mule not black like those but really cherry colored. Dave says I sold a cherry colored mule to a guy in Bakersfield CA, The hitchhiker says damn , thats where this guy had his . They exchanged names and sure enough it was the same guy who was friends with Ron Dodson . The guy said he bucked everyone off but he was now dead . Dave said how could that ornery mule die? The man made enemies with the wrong people and someone drove by at night and the mule Eeyore was shot down .! What a strange twist of events for a pig eyed nondescript cherry red mule! I was sitting at my water tank looking at two mules today and thought this true story was worth telling . I left out some of our exploits , maybe save them for a rainy day. There was never another guide like Dave ever . He was my best friend and was the toughest man , other than myself, to have by your side. When he left he gave me two years notice. There is nobody that has ever worked for me that I have more respect for ! 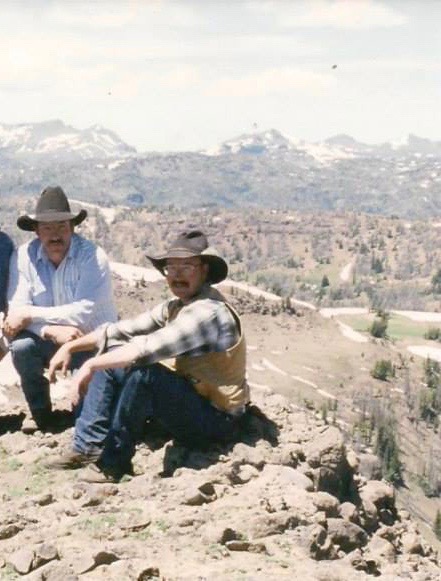