I was thinking today about all of the hunting seasons I’ve been through. Monday I leave for about 40 days in the mountains. I’ve always taken a broke horse and a colt to ride . This is a picture of Dollar sucking and the Hell Bitch. Everyone had a Hell Bitch after Lonesome Dove. She really was ! I’m not sure what I was raising but I bred her to my Hancock Stud! She was a wild black mare unbroke and should of been in the bronc riding somewhere! When the colt hit the ground and stood up he pawed at me with his ears forward . He was mean from the first minute . I halterbroke him cut him and turned him out till he was four , big mistake . When we gathered him he was 17 hands and 1350 pounds and the prettiest horse you ever saw ! I took him to camp and could never get him rode to go hunting on . He bucked me off 11 times , most in the dark. I traded him to Dick Lyman , one of the best cowboys I’ve ever known . He got tired of him bucking and put him in the bronc riding , as Dick was a pickup man for Jacobs Livestock, and he fell down and quit bucking . He was smart as he didn’t quit bucking as a using horse. So Dick sent him to Shane Moran to ride. Now Shane is a damn good PRCA bronc rider and pickup man! He has started over 70 colts for me . I think he told me that he rode Dollar for 75 days straight on big circles before he got him to handle but he was still unpredictable! He was becoming kind of famous in Montana ! I was sitting in my camp and telling Jerry Metcalf about him and I looked up just then , true story , here comes my cook leading Dollar into camp . Three years after I sold him . Apparently Sue got a good deal on upping my life insurance and bought him back from that damn Dick Lyman🙂! So true to his nature he was still mean when you let him rest . He never kicked but he’d paw you quick if you walked up to him straight on. By this time he was 17.2 hands and as perfect as you’d expect a horse to be! Strawberry roan and built to kill. Literally! He never bucked when I was ready it was always dragging an elk or something . I remember the day he really blew up and I got him rode , I came back to the barn so happy to brag on myself , I was like a kid who rode his first bronc in the rodeo . At -20 below and at that time no heat in saddle room and that saddle was frozen stiff and he was so humped up you could throw a basketball under it , he was scary ! I don’t care how tough you are he was scary as you knew it was pitch black headed up the trail . I never weakened but I finally sold him to a guy who said he choked on a pellet. I have my doubts but ……. I tried every training method I knew and so did Dick and Shane ! He was born smart and wicked! Headed to camp Monday Jerry you remember this? Hope my friends enjoyed it. 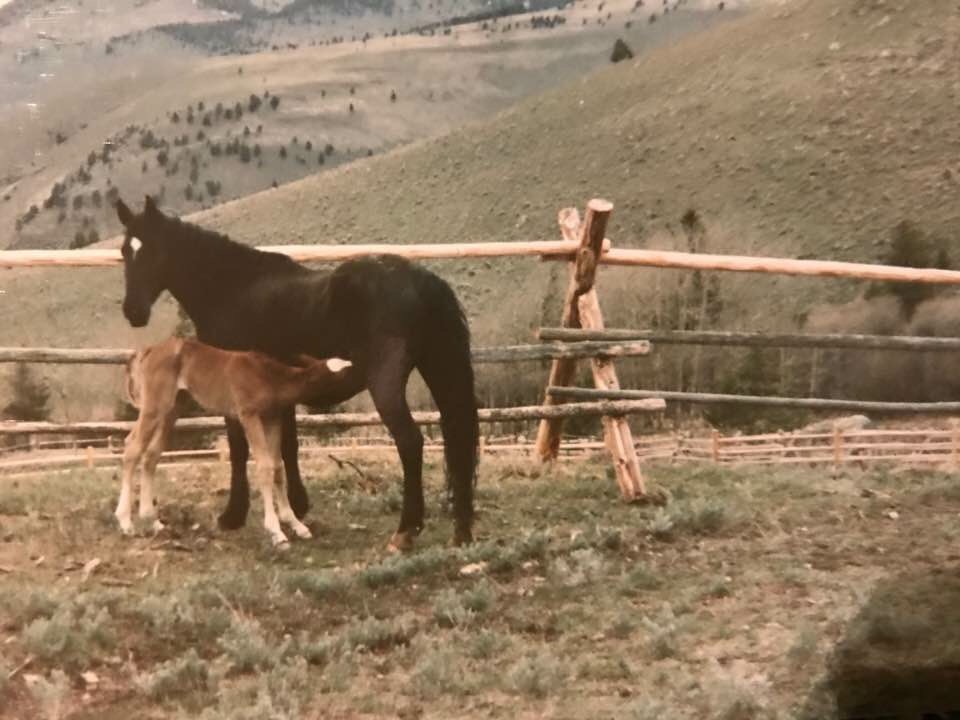